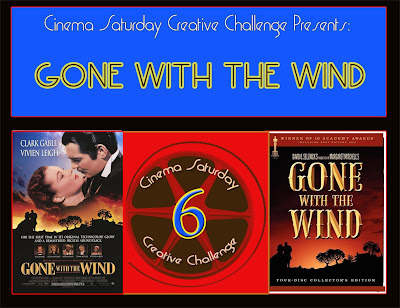 Our Sneak peek photo
Man, some of you are hard to fool! We had so much fun reading all your comments about the sneak peek ! Here is the reveal of the full sneak peek picture...We sure enjoyed all the chatting about the movie preview. You are all so clever.. We can hardly wait to see what you come up with. "Gone With the Wind" - what can we say... 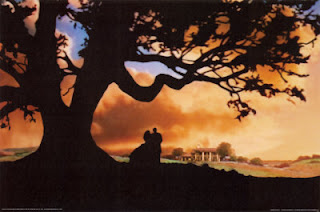 Just the title alone says it all. A classic! We have spent quite a while watching clips on youtube this week and chatting about this movie. It just gets us excited to watch this movie from start to finish. Margret Mitchell won the Pulitzer Prize in 1937 for her novel "Gone with the Wind", which was later adapted into a screenplay for the silver screen. It went on to win 6 Oscars. Margret Mitchell's novel is one of the best selling novel - it has sold more than 30 million copies . We learned so many cool facts about this movie and the making of it. Please check out fun facts we gathered for you about the movie. If our facts whet you appetite for more, you will be amazed at the history about this movie.

I had a little fun with this first card - The silhouette of Scarlett and Rhett was painted and then the outside says: "Frankly my dear..." and then the inside says: "You had me at hello" (which is from Jerry Mcguire - but I just had to use it for this card - because the juxtaposition kinda cracks me up :) .. 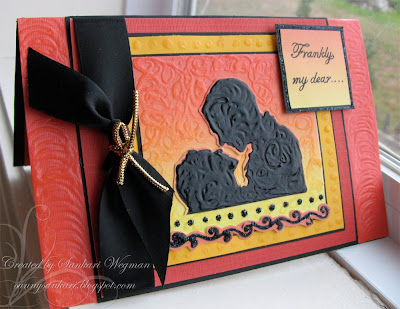 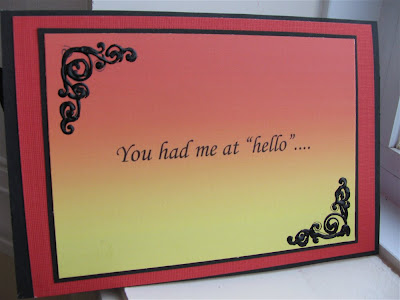 This second card was made from the a scene in the movie, when Scarlett resolves to move forward into tomorrow... that scene was the inspiration for this card - which is where the sentiment: "Celebrate the Dawn " comes from... just to celebrate the possibilities that every day holds... 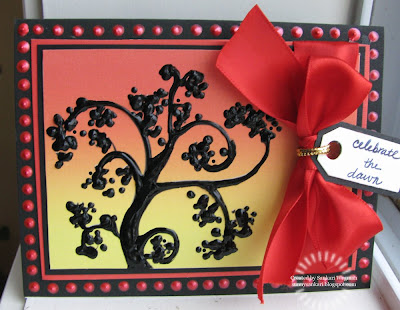 I was originally thinking about making a card from the scene at TARA with Mr O'Hara and Scarlet and he is trying to convince he that all she needs in here life is the land. When it came to it I was really inspired by the dresses that these woman were waring.. AMAZING! Come over to my Blog to see were I got my inspiration.. 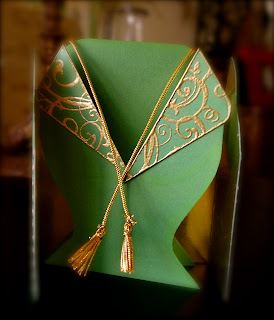 Fun Facts about "GONE WITH THE WIND"

When Gary Cooper turned down the role for Rhett Butler, he was passionately against it. He is quoted saying both, "'Gone With The Wind' is going to be the biggest flop in Hollywood history," and, "I'm just glad it'll be Clark Gable who's falling on his face and not Gary Cooper."

The movie's line "Frankly, my dear, I don't give a damn." was voted as the #1 movie quote by the American Film Institute (out of 100).

The film had its first preview on 9 September 1939 at the Fox Theatre in Riverside, California. In attendance were David O. Selznick, his wife Irene Mayer Selznick, investor John Hay Whitney and editor Hal C. Kern. Kern called for the manager and explained that his theater had been chosen for the first public screening of "Gone With the Wind" though the identity of the film was to remain undisclosed to the audience until the very moment it began. People were permitted to leave only if they didn't want to hang around for a film that they didn't know the name of, but after they'd gone, the theater was to be sealed with no re-admissions and no phone calls. The manager was reluctant but eventually agreed. His one request was to call his wife to come to the theater immediately, although he was forbidden to tell her what film she was about to see. Indeed, Kern stood by him while he made his phone call to ensure he maintained the secret. When the film began, the audience started yelling with excitement. They had been reading about this film for nearly 2 years, so were naturally thrilled to see it for themselves.

For the premiere in Atlanta in December 15, 1939, the governor declared a state holiday. Ticket prices for the premiere were 40 times the usual going rate.

Part 2 (Sneak peek is from this sceen)

"Frankly my dear I don't give a Damn"

We hope you all had a great time re-visiting a classic.. We know we did. The last time either of us watched this movie was in High school... And that was a long time ago.(hee,hee)

Have fun creating your Masterpieces.

Link your entries here by Thursday, November 20th by 9 pm PST. You can create anything from cards, layouts, to altered projects - anything really. If posting to Splitcoasters then use the keyword: CSCC#6.

And Enjoy the show!

FRANKLY MY DEAR! your cards are amazing.I love all the deep rich color you used.. You were totally thinking the same thing as I with the silhouette theme. I am totally impressed with all you can accomplish in such a short amount of time.
&
FRANKLY MY DEAR is a so glad to call you FRIEND!
You are such a SUNNY part of my day!
Loves and Hugs
Brooke

p.s. hope you have a great visit this weekend.

Woo-Hoo! Totally fun & your cards are amazing as always. Love the texture.

The cards are beautiful ... this one will be hard for me. Everyone loves this movie except me it seems. I will think about it!

Wow, what amazing cards! I just found your blog this morning. I'm going to have to catch up with the old challenges and then start up with you guys. What a very cool idea for card challenges!

Ladies, I love doing these challenges! It's so fun to see all the different places we get our inspiration from. Here's mine:
http://creativeantics.blogspot.com/2008/11/inspired-by-scarlett.html

Fabulous cards girls! So much fun to check them all out.

My card is here.

Thanks for the challenge.
Sam.

Hey! Here is my card!
Lovin what you guys are doing!
http://deespapertree.blogspot.com/2008/11/cinema-saturday-challenge.html
dee

Whew! I didn't think I'd ever get a chance to get my project posted. I just can't seem to get a good picture of it.

Anywho, I got what I think are "adequate" pictures and I hope ya'll enjoy them.

What a great movie pick! Very challenging. Love your cards.
Here is mine