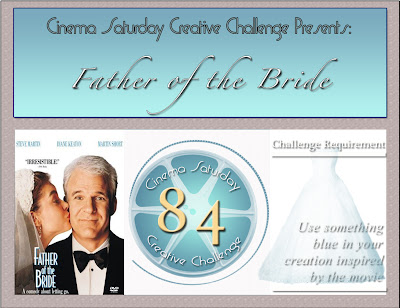 Welcome Everyone to our 84th movie challenge, where this week we are featuring the 1991 movie: Father of the Bride. June is usually a popular month for weddings and with tomorrow being Father's Day - we had to do this movie :) Steve Martin does a wonderful job of documenting the journey of a father as he learns his daughter is getting married and that his little girl is growing up. If you want you can create a card that is either for a special father/husband etc. or maybe something weddingish -or any other theme from the movie. The challenge requirement for this week's movie pick comes from the old wedding saying: "something old, something new, something borrowed, something blue" - and so from that we drew the inspiration to make this week's requirement to use "something blue" in your card - it could alot blue or just a little blue - whatever you like :) Just a couple of things:
We would love it if you would share where in the movie your inspiration came from - and also that your creation is a current one that you created in this week. We love seeing your amazing creativity and can't wait to see your gorgeous creations! If you haven't seen this movie, its a very sweet one (both hilarious and heart warming) - here is the trailer:
Brooke's card inspired by the movie "Father of the Bride" 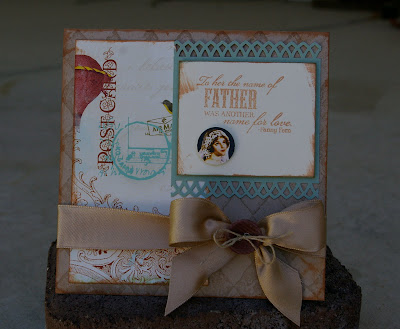 (Notice I even included a little hot-air balloon on my card to make it more personal)
Father of the Bride came out December 20th 1991. When We first saw this movie it was 1992 early spring and I was expecting our first child. I remember my sweetheart looking over at me with tears in his eyes. REality was just sinking in that this was going to be his reality some day. We needless to say we had a boy and then another boy and finally we had our little girl in 1998.. There is just something about a Father Daughter relationship that is so beautiful. I LOVED to go on errands with my dad growing up we would go to the car dealership and then got to lunch. Or go to the paint store, check on property or go see people that my dad had business with then lunch.. I loved going Ballooning with my dad and being part of his chase crew. It was soooo much fun. When It was time for me to go to college my dad wanted me to say home so I would fall in love with someone who would take me far from him. So I did and fell in love with an amazing young man that only lived a few miles away... The day before I got married my dad gave me a locket with my initial on it that hung from a bow. I pined it on my dress that I made for our wedding luncheon the next day. (not my wedding dress) I can totally see my dad and my sweetheart in Steve Martin when I watch this movie.. The heart-ache and longing for their little girl to not grow up and leave the nest. This move is a must see.
HAPPY FATHER DAY DAD!
Visit me on my blog to see another card I made for a wedding shower :)
hugs,
Brooke
Sankari's card inspired by the movie "Father of the Bride"
I remember laughing so hard at Martin Short's character when this movie came out (especially the part where he says that he will translate for Hank the Chef! hilarious) But most of all - I was just inspired by Steve Martin's character and his love for his little girl - his little princess who was now getting married - who suddenly is seen as a "woman" - and as the wedding plans swirl around him and the bills start mounting and he needs to hyperventilate a few times - the one thing that keeps him steady through the chaos is the love for his daughter. And through all the stress of wedding planning - I just adore the way he looks at his daughter - and even though she is all grown up - he always sees her as his little girl that he will love and protect. So my card is inspired by his eternal love for his daughter . The sentiment on this card says: "Father, another name for love" 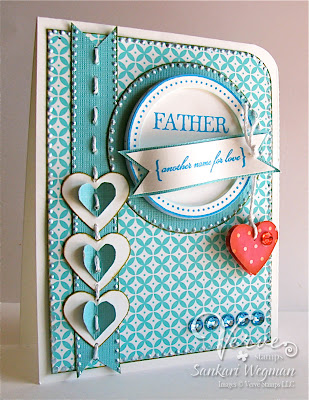 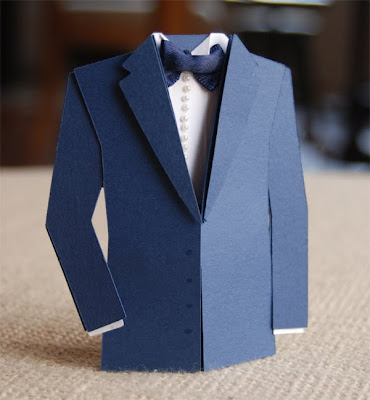 Here's where my inspiration for the card came from this conversation:
Franck Eggelhoffer: Uh-oh, I bring the wrong color thread. I assumed you'd be wearing a black "tuxado."
George: It is a black "tuxado."
Franck Eggelhoffer: I don't think so, babe. This tux is "nuffy" blue. No doubt about it.
George: What're you talking about? Armani doesn't make a blue tuxedo.
Franck Eggelhoffer: Armani don't also make "polyaster."
Here's my card. The tuxedo template card is from Angela Sgro (featured in Scrapbook trends mag).
Blessings,
Amy.
Check out all the amazing details of Amy's gorgeous creation on her blog!!
Karli's card inspired by the movie "Father of the Bride"
I LOVED this movie & had not seen it before. (I’m a horror flick chick :) but I was cracking up! Steve Martin is SOOOOO good at being flat out hilarious. His facial expressions are priceless! One of the reasons I love playing along with CSCC is being exposed to movies I probably would never have seen (like this one, & Dear Frankie) that I have thoroughly enjoyed! For my card, I went with a lighter blue & created a pop up engagement ring. 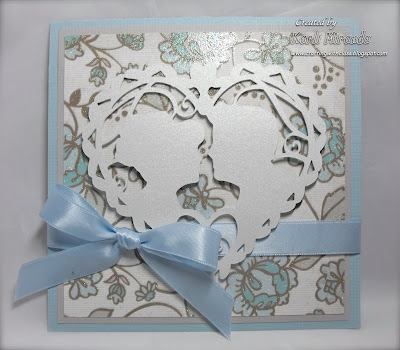 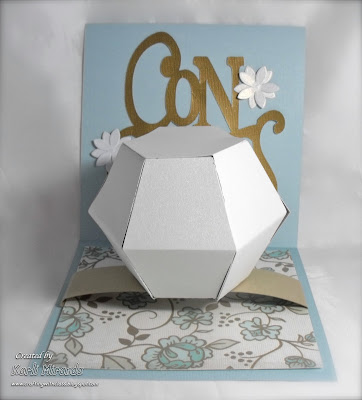 In the movie, Annie gets a simple vintage ring, but I went with a big ol’ one! Go big or go home, right?! (Hee! Hee!) All the deets can be found on my blog. Thanks again & again for letting me play as guest designer. It’s always way fun!
Big Hugs!
Karli
Check out the gorgeous details of this beautiful creation on Karli's Blog!
----------------------------------
Our other Audrey winners who were announced last week will be joining us coming up!
Would you like to be the guest designer for next week? Then all you have to do is to create a card, layout, creation that is inspired by the movie: Father of the Bride and that uses the challenge requirement for this week, which is to use something blue in your creations. Your creation can be inspired by anything in the movie, from the dialogue, the sentiments, the characters, the costumes, the furniture, the period, the music, etc. Anything at all that inspires you from this movie - and please share where you got your inspiration from - we love reading about how you translate something from the movie into your creation!
You can post your challenge entry anytime from now till Thursday, June 24th at 8pm CST!
Can't wait to see your Father of the Bride creations!!!
Big hugs,
the Cinema Sisters!!!
Posted by Brooke S at 9:30 AM

Audrey WInners are coming up soon!

Sheesh! You ladies did such fabulous creations. How are we mere mortals s'posed to compete with these?

Love the movie. I actually have the original Spencer Tracey - Liz Taylor version on Netflix instant view right now. It's called Father of the Bride too. Then there's a sequel called Father's Little Dividend. I love Spencer Tracey in the roll of Stanley Banks.

If you haven't seen these run, down walk to your nearest BlockBuster and rent it today. Or just go to Netflix and put it in your cue. Both movies are available in Straming video as well.

I am looking forward to trying to come up with something as stunning as you gals have presented.
Hope everyone stays cool this weekend. It's HOT, HOT, HOT in north Texas!!!

A huge thank you to Amy and Karli for being our guest designers this week!!! WOW! - what gorgeous 3D creations you guys have created!!! Simply inspirational!!! Thanks girls!!!

Betty - you always knock our socks off!!! Sending you hugs!!!

Here are some interesting trivia bits from this movie!
Steve Martin's character of George Banks was named after David Tomlinson's character of the same name in Mary Poppins (1964).

Actor Eugene Levy appears in both this movie and Father of the Bride Part II (1995), but as different characters in each one.

George's middle name, Stanley, is named after Spencer Tracy's character in the original Father of the Bride (1950).

Among the wedding gifts Annie receives is a Venus de Milo statue with a clock in the stomach. In the original Father of the Bride (1950), Kay also receives this as one of her wedding gifts. Both look at it with disdain.

Eugene Levy and Martin Short who appear together in Father of the Bride as well as the sequel both attended Westdale Secondary School in Hamilton, Ontario, Canada

I always love reading little trivia bits behind the movie!!! :))))

Retract:
Father of the Bride the original is NOT available on streaming video. It's rental only. Sorry.

Just created a Facebook page for our group - hope you will join if you are on there:

Oh my, how gorgeous all the shown creations are! I couldn't agree more with Betty, it'll be difficult to come up with something nice, I'll try to figure out what.

I've entered my card in the Linky-thingy, but it doesn't show up. You can see my card HERE just in case it never shows up.

Thanks for another fun challenge, Ladies!

Love this movie and so glad to play this week!

Hello girls,
it seems that Mr. Linky isn't working? I do so want to play, so
here's my card

Thanks for having a look!