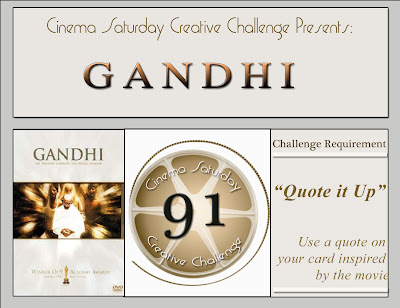 Welcome to our 91st Cinema challenge - where this week we are featuring the 8 time Oscar winning movie (including Best Picture, Best Director, Best Actor in a leading role..) released in 1982: GANDHI. Since August 15th (tomorrow) is the celebration of the Indian Independence Day from British Rule and the day that India was born as a sovereign nation - we thought it would we could honor this celebration by featuring this movie that follows the life of MK Gandhi and shows how he was transformed from a lawyer in South Africa to become a national leader in the move for Independence and a national treasure. This movie is beyond inspirational - it shows the multi-level complexity in the struggle for Independence - but more than anything it shows how the simplicity of truth and conviction in one person's heart - changed a nation forever.
"Generations to come, it may well be, will scarce believe that such a man as this one ever in flesh and blood walked upon this Earth."- Einstein
There are so many lovely and inspiring quotes in this movie (not just from Gandhi-ji) and so we thought for our challenge requirement today - we could "Quote it Up" . Use a quote that is inspired from the movie in your creation! If you haven't seen this movie its a definite must!
Brooke's card inspired by the movie ~ GANDHI 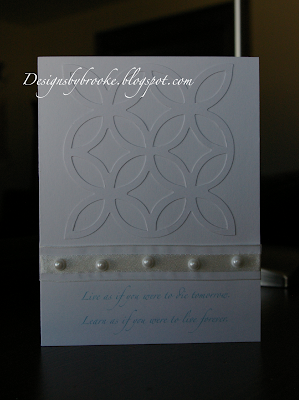 Live as if you were to die tomorrow.
Learn as if you were to live forever.
Gandhi
When I think of Gandhi I think of simplicity and the color white. Gandhi is such a dedicated example of peace with out violence.. When in South Africa he was unfairly treated because he was an Indian... He lead a non-violent movement to gain equal rights for the Indian people in South Africa. Gandhi was invited to return home and help bring India's it's Independence from the British Empire. Gandhi agrees and again approached the effort without violence. He faced many troubles along the way and is even imprisoned.
When India is trying to define who was during the early years of it's rebuild as a nation there is a huge conflict between the Hindus and the Muslims.. It erupts into a nation-wide violent upheaval. Gandhi declares a hunger strike, saying he will not eat until the fighting stops..
A defining moment for me is Gandhi's conviction to non-violence.. He will forever live in his example of peace and wisdom.
I hope you all enjoy this movie and leave enlightened with peace and a new way to solve conflict as I did.
HUGS
BROOKE
Sankari's card inspired by the movie ~ GANDHI
I remember the first time I watched this movie was sitting in between my parents at the historic Senator theater in Maryland when the movie came out. I was almost 9 years old at the time (way too little for certain parts of the movie where there is fighting) but watching that movie with my parents and a whole theater full of Indian people on Independence day left a deep impression. I watched my parents cry, I heard those around me sing with certain parts of the movie and clap when Independence was announced and at the end of the movie - we all stood as one and applauded. I have watched it again and again since that early age of 9 and every single time I have been moved in a different way. The courage and conviction to stand against the might of the British Empire - in the most simple way - to not raise arms and fight - still gives me goosebumps and inspires me.
What Gandhi-ji (btw- to add "ji" at the end of his name is a way to show respect - kinda like adding a mr. before a name) did was to show the inhumane-ness of violence when no one strikes back. I love the quote of his: " An eye for an eye makes the whole world blind". But then I also love this quote: "Be the change you wish to see in the world." and was so excited to see it in rubber (from Unity stamps). 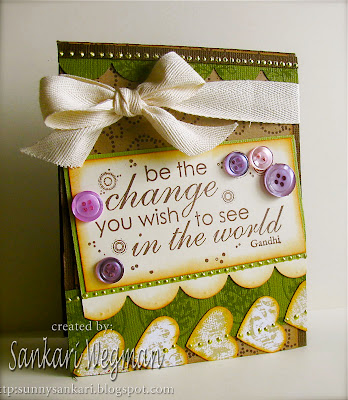 The ribbon is white twill that is inspired by Gandhi-ji's movement for home spun cotton so that it wasn't being imported from Britain and also for his simplicity of cloth, home and food. The hearts for me symbolize the love of a nation and the colors are more of an earth tone - the way that he was with Mother India. I loved making this card and loved watching this movie again with my parents before I made this card.
One thing that I will say is that there are some parts that are hard for me to watch - even now -but I thought that director Richard Attenborough really honored India and Gandhi in the making of this movie -and Ben Kingsley's portrayal of Gandhi is amazing!
Can't wait to see your quoted up movie creations!!!
Hugs Sankari
----------------
Regarding our AUDREY WINNERS - We loved your Casino Royale posts and are still going through your StarDust creations and will post the Audrey winners for both together! I still have to go through your gorgeous creations on the road home (we are driving 14 hours later today) and will try to post it later on this evening (so grateful for the internet in my phone :) ! Thanks for being patient with us and our choosing of the Audrey winners - its been hard during the summer to blog and card make & enjoy family time - but you guys are like our Cinema Family and we simply adore being able to be connected to all of you with blogging! Hope that each of you are enjoying your summer and will play along with us this week!!!
-----------------------
Play along with us by linking your blog post with this challenge below. Your creation can be inspired by any theme or aspect from the movie: GANDHI and should use the challenge requirement OF USING A QUOTE IN YOUR CARD. Your creation can be inspired by any aspect of the movie from the characters, memorable quotes, costumes, songs, dialogue, themes, furniture etc. - let us know where you got your inspiration from - we love reading how you translate an idea into your creation!
Thanks so much for playing along with us this week!
We can't wait to see your quoted up creations!
hugs,
The Cinema Sisters
Posted by Brooke S at 9:30 AM

Beautiful cards ladies!! Love the quotes used and your inspiration behind them. I loved hearing your memories of the movie Sankari -thank you for sharing.
I haven't seen this yet, just put it at the top of my Netflix, should get it in time to play.

great cards, girls. And thank you for honoring the Indian Independence day and struggle. I'm watching Gandhi as i write this. since tomorrow is our independence day, they are airing it on tv today. I think we used to watch this movie every year on this day and on Gandhiji's birthday when we were younger. I enjoyed telling my son a little about the story of Indian independence today.
Jai Hind :)

Wow, I haven't seen this movie since middle school (I think) but it's certainly time to revisit it with my boys watching too. I didn't know about adding the -ji, so thanks for sharing that, it's an important detail to know. Beautiful cards ladies :) Big Hugs~

This is one of the most moving movies I've ever seen; it has left everlasting impressions in my mind and the quotes both you and Shankari have used are still very familiar. Love both your cards, Brooke's embossing is fab and Shankari's hearts to me symbolize that there can never be enough love in this world. TFS and I'll try to be back with my card asap :-)

What an inspiring man! You are doing a wonderful job with your movie picks and challenge twists! I was wondering, and I have been wondering who won the Audrey for #82, The Greatest Game Ever Played - It was back in June, and I know I must have missed it but I can't find it anywhere! THANKS!